If you had just eleven days to play seven of the best golf courses in Scotland (if not the world), then this selection would be hard to beat. With your base at the country's golf hotels, you will get to tee-off on courses that regularly feature in the Open rota as well as the most recent Scottish host of the Ryder Cup, sampling the finest selection of what this golfing paradise has to offer. But that's not all because there is optional whisky tasting and guided tours to pack enough stories for years to come. Now if that does not whet your appetite, we wonder what will.

Arrive Edinburgh and transfer or collect car hire meeting our on ground representative. Drive just under on 1 hour to Russacks Hotel for 4 Night’s accommodation to begin your Scotland golfing adventure.

Free day to be balloted on the Old course or we can arrange a round on one of the many local St Andrews trust courses if not successful.

Note: Nearly 50% of the total number of tee times on the Old Course each year are allocated to the Ballot. It is drawn 48 hours in advance. Golfers should provide their names, home club and handicap details (24 for men and 36 for women) before 2pm 48 hours before the day they wish to play. The draw will be made shortly after that and the results posted by 4pm each day. If successful the green fee is paid directly on the day to the Old Course starter. Please note, pull carts are not permitted before 12pm.

Kingsbarns Links, opening in 2000 to unprecedented levels of international acclaim, a remarkable links achievement that stretches along one and a half miles of Fife coastline just outside St Andrews. Covered in a sublime dunescape and with outlooks across the North Sea.

Carnoustie Golf Links, one of the toughest courses on the British Open rota, playing host on 7 occasions, the Championship course opens up easily enough before the bite begins around hole 6 and culminates with the last 3 holes. Playing to Par here on the finishing holes is a great achievement.

Another chance to be balloted on the Old course if you been unsuccessful.

Drive North to Inverness for 3 Night’s accommodation in the Kingsmill hotel.

Royal Dornoch is spellbinding and many golfers from all over the world make the pilgrimage to this natural links at some point in their lives. It is often quoted as one of the must-play courses. It's wild, isolated and, at the same time, absolutely beautiful and a great challenge.

Castle Stuart Golf Links overlooking the Moray Firth and well-known landmarks that are synonymous with Inverness and the Black Isle – Kessock Bridge and Chanonry Lighthouse perhaps the most notable. All in all it can be described as a throwback to golf as it once was – a simple walk through pleasing natural surrounds

A pleasant easy drive back done south to South Ayrshire to the quaint town of Troon and check into the Piersland Hotel next to Troon golf course and an easy 10 minute stroll into the local town.

Royal Troon, one of the great championship Links courses in the world, with the wind and rough accurate shot making is essential. The course is not overly long and the first nine is normally when you need to make your score

Your final day playing golf will be one of your highlights as you drive 35 minutes South to Turnberry. Home of four Open Championships, the legendary Ailsa course has hosted some of the most iconic names in golf. Reborn in June 2016 at the hands of architect, Martin Ebert, the changes makes the Ailsa the number one ranked golf course in the UK. 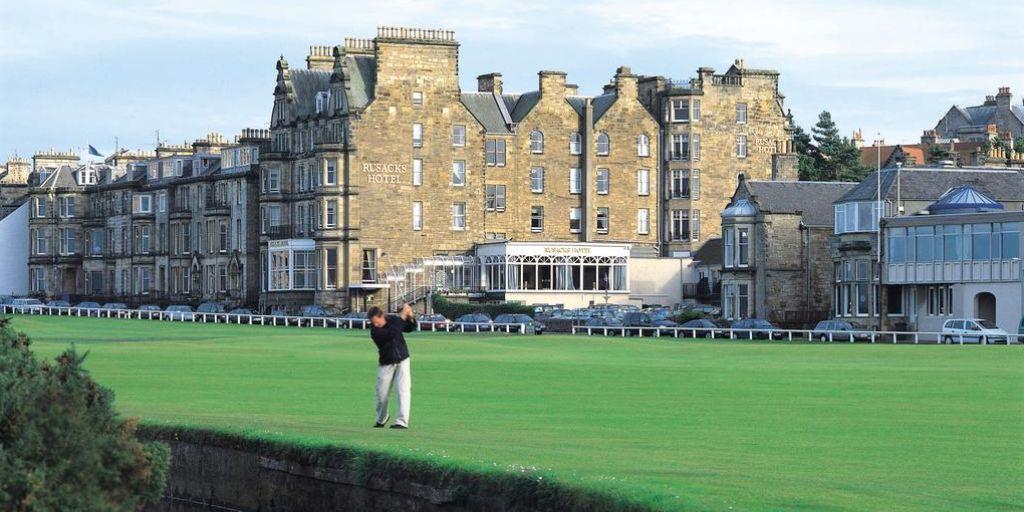 Unquestionably Scotland's greatest golfing hotel, the Macdonald Rusacks Hotel is located within a sand wedge of the 18th hole of the famous Old Course, and a stone’s throw of other illustrious courses in St. Andrews. Stylishly remodeled on a golfing theme, the property offers luxurious accommodation occupied by some of the great names in the game's history. 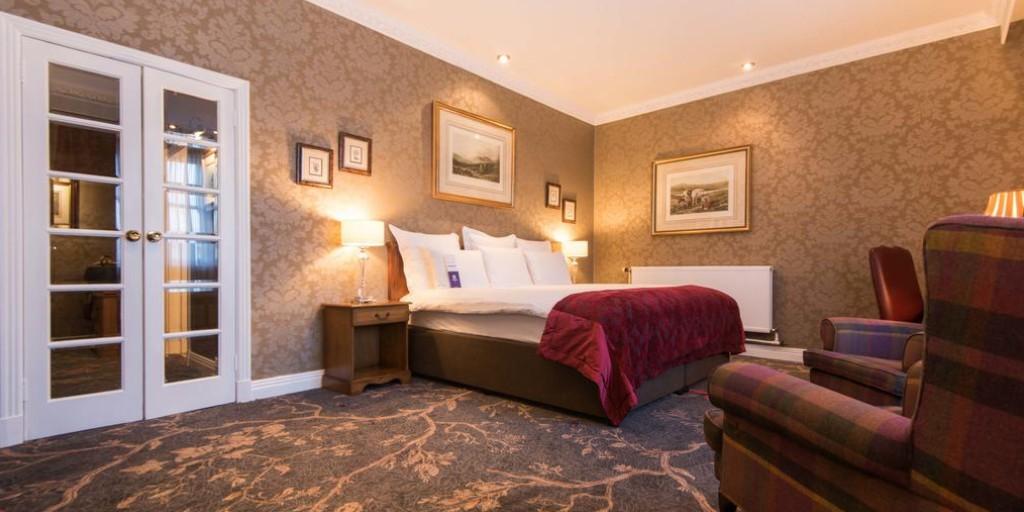 Set in 4 acres of beautiful gardens, the Kingsmill Hotel is a 4-star hotel in Inverness with a rich and diverse heritage dating back to the 18th century and is ideally located just a kilometer away from the Inverness city centre. Many of the spacious rooms at Kingsmills Hotel have garden views. Features include satellite TV and tea and coffee-making facilities. Some rooms also have patios, or private access to the hotel gardens. 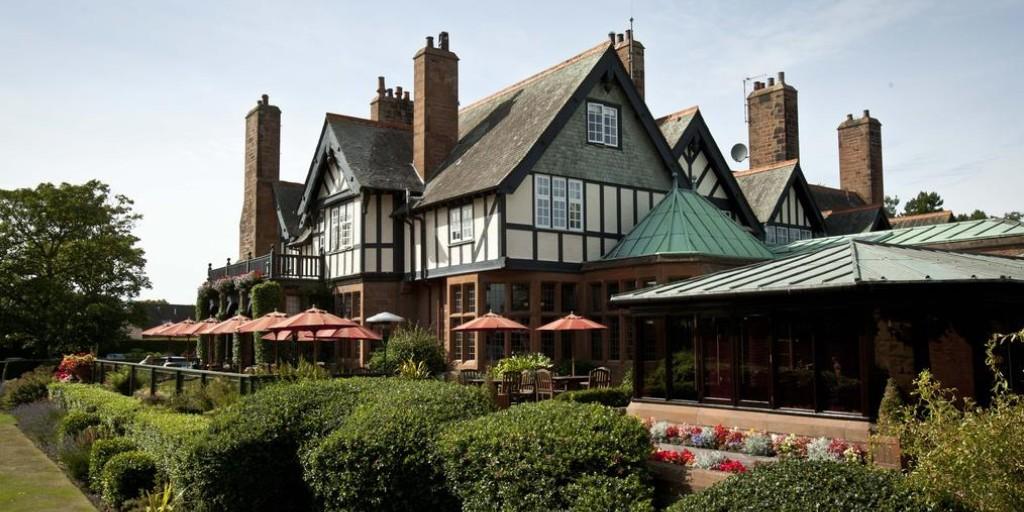 Piersland House is a stunning country mansion house style hotel in glorious grounds and gardens in Ayrshire. This architectural masterpiece, the former home of the Johnnie Walker Scotch Whisky family, is a timeless ambience of quiet sophistication, elegance and charm that will strike you as soon as you enter. No country house experience is complete without an eclectic range of individual styled and contrasting guest accommodation, and with a superb choice of hotel, lodge and mews styles, Piersland has this in abundance. 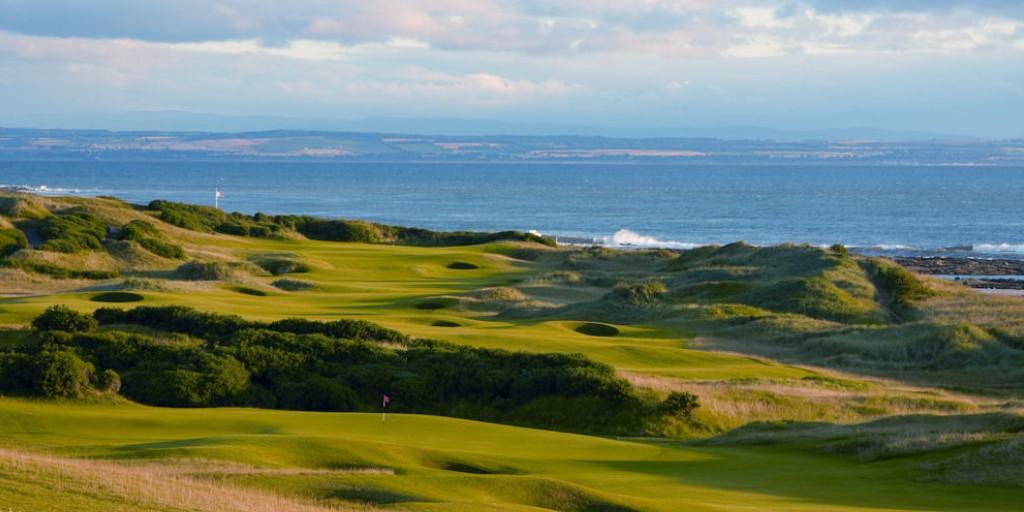 The Kingsbarns Golf Links along the North Sea coast has its origins dating back to 1793. Lying between St Andrews and Crail on sandy soils with undulating ridges and hollows, and even its own burn, the course is dramatically set immediately against the rugged coastline. It is entirely possible that this is the last true links course that will ever be built in coastal Scotland, with sea views from every hole. The greens in general of Kingsbarn are extremely difficult, being very fast and sloping in different directions. 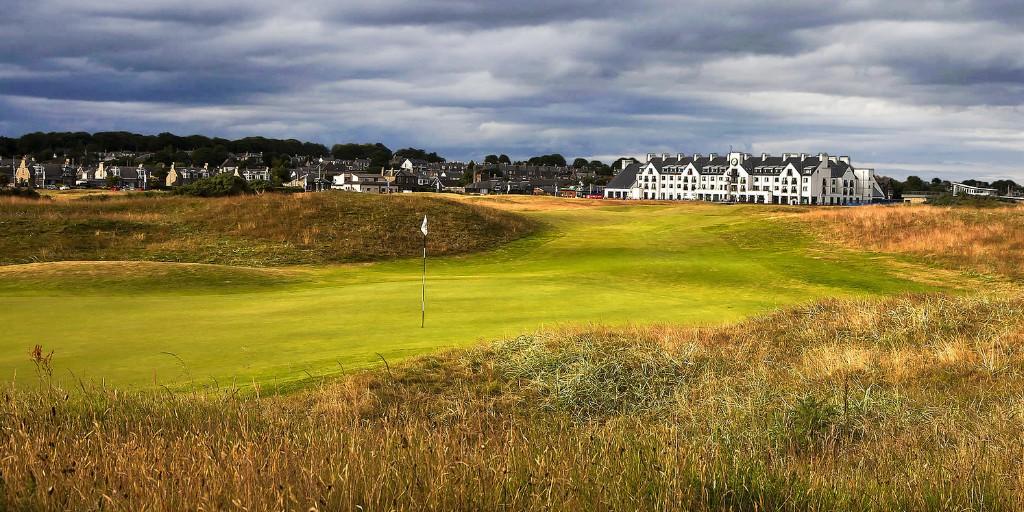 Having hosted eight Open Championships, one Ladies Open and one Seniors Open, apart from being the co-host of the annual Dunhill Links Championship, the Carnoustie Championship Course is no stranger to world fame. While the course may not possess the natural beauty of a Turnberry or Royal Co. Down, what it lacks in aesthetics is more than compensated by the challenge it presents. Generally regarded as the toughest course on the Open rota, those who understand the game a little more will know it is probably the fairest too. 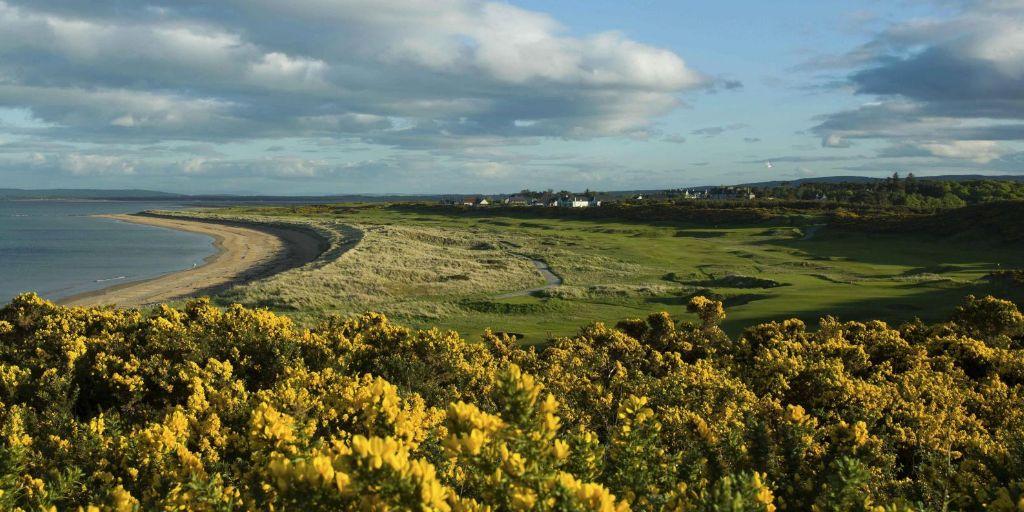 Located just 8 degrees below the Arctic Circle, none of Scotland’s ancient links golf courses evokes quite as much romance as Royal Dornoch, ranked #1 in Scotland, #5 in the World, by Golf Digest. Legends Old Tom Morris, John Sutherland, James Braid and Donald Ross all perfected their craft here. In fact, Herbert Warren Wind famously assessed in his 1964 New Yorker that “Dornoch’s fairways are…better than the Old Course, greens are…reminiscent of those at Augusta but smaller, and layout… of the finest resourcefulness.” 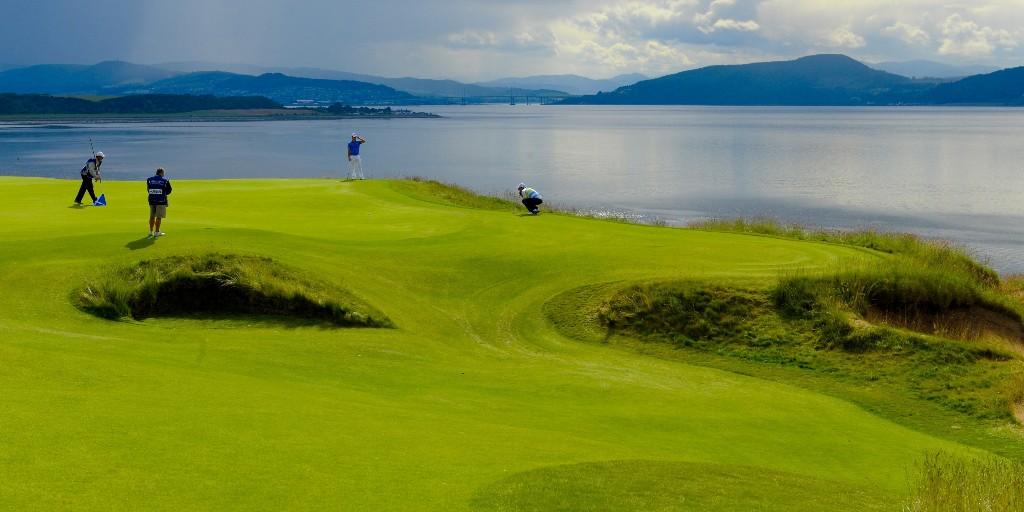 Located in the Scottish Highlands capital of Inverness and developed by Mark Parsinen (the same man who created Kingsbarns Golf Links in St. Andrews), Castle Stuart is another modern links with its own twist on Scotland's centuries-old game. The golf course features six holes played on a natural, low-lying piece of land, followed by the remainder of the course playing high above it. There are many little subtleties to Gil Hanse's design, including many holes that dogleg toward the sea. 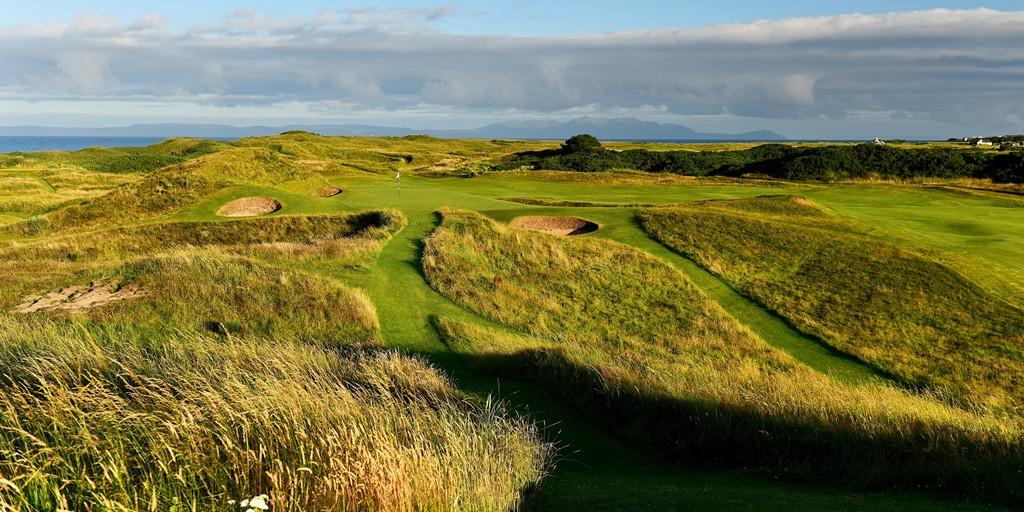 Though a relative latecomer to the Open Championship circuit, the Old Course at Royal Troon Golf Club has played host to the British Open nine times, producing champions like Bobby Locke, Arnold Palmer, Tom Weiskopf, Tom Watson, Mark Calcavecchia and more recently Henrik Stenson. A classic links course in every respect, the golfer is eased into the challenge with each hole appearing to get progressively tougher. Running straight out and back along the coast, Troon often changes dramatically from front nine to back. 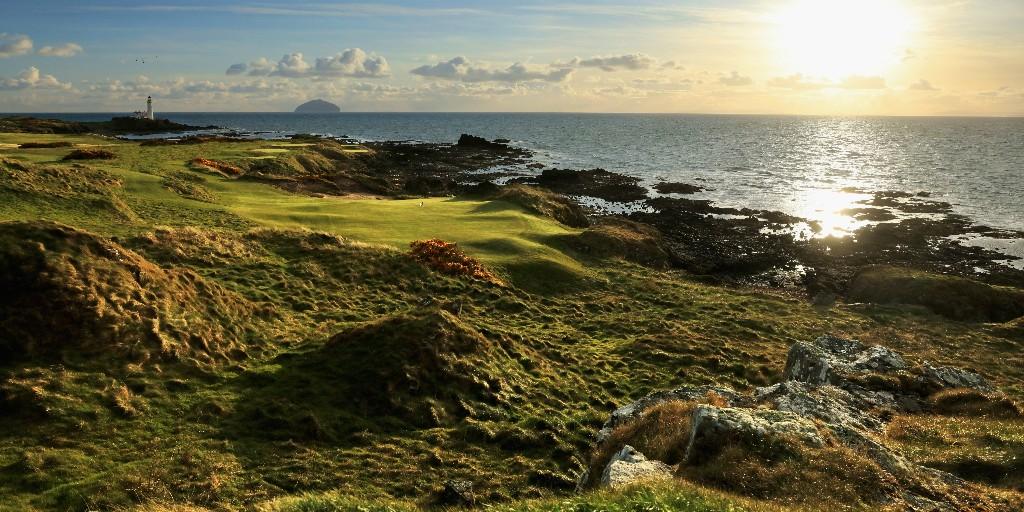 Named after the third Marquess of Ailsa, who owned the land on which it was built, this par-71, 6474-yard championship course is one of golf's most storied places. The iconic island of Ailsa Craig, situated as a granite ball 11 miles out to the sea, the equally iconic lighthouse, the Isle of Arran and the Mull of Kintyre provides a very special perspective that is a match for any course in the world. Home to four Open Championships, the Ailsa has shaped some of the most remarkable moments in the tournament's history including Tom Watson’s one shot win over Jack Nicklaus in 1977 (Duel in the Sun). 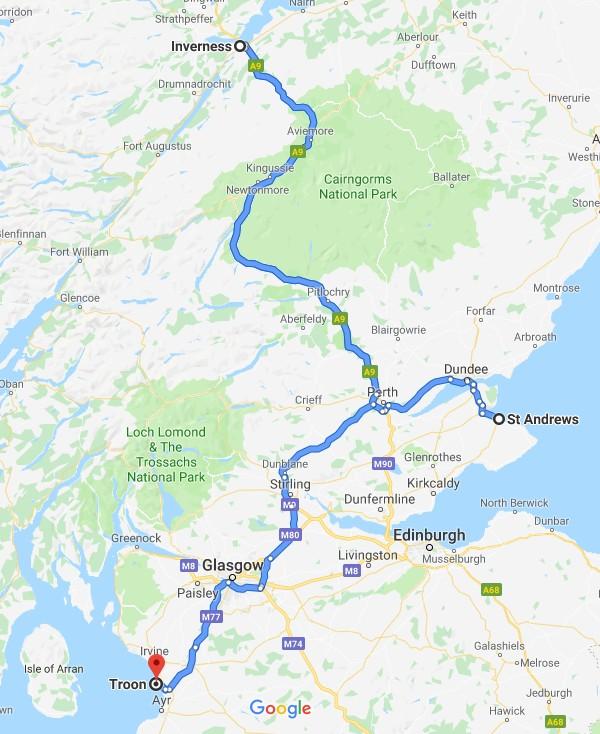 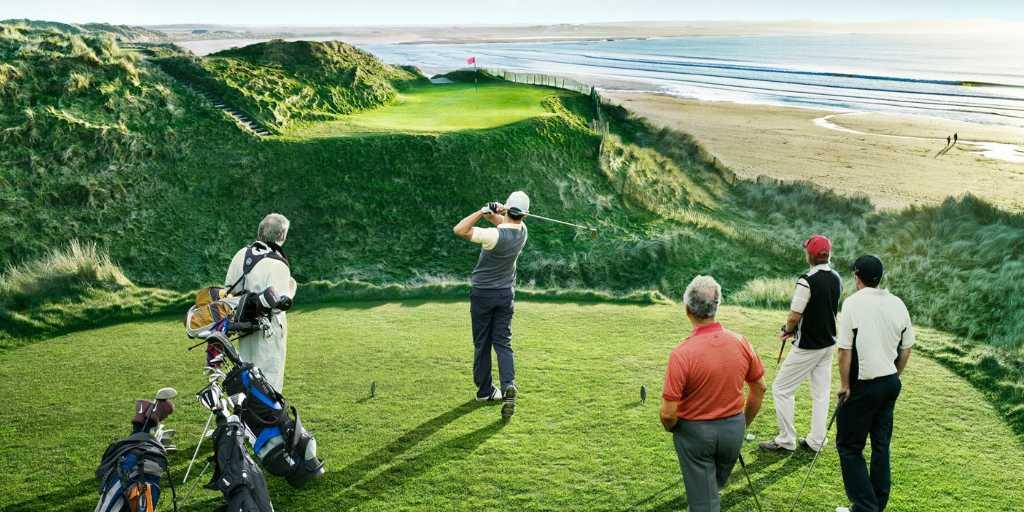 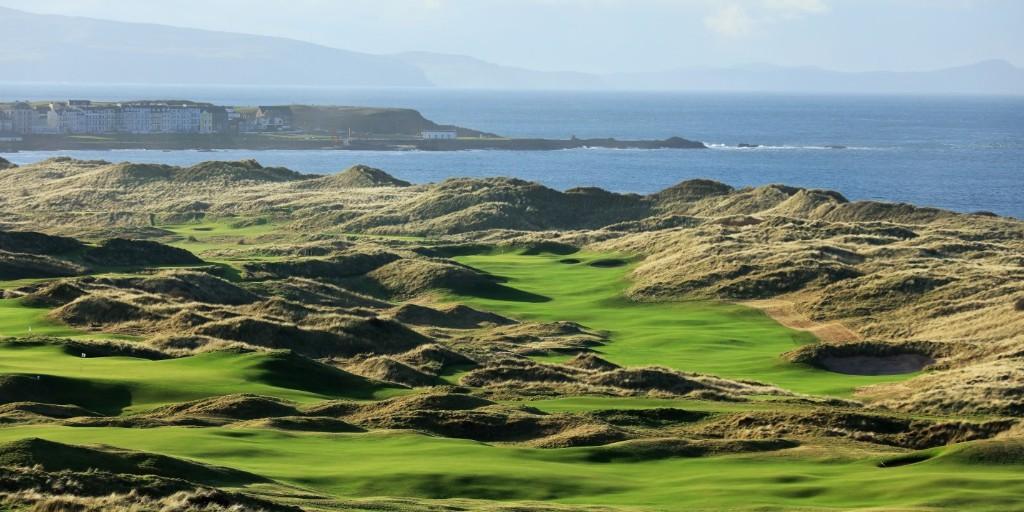 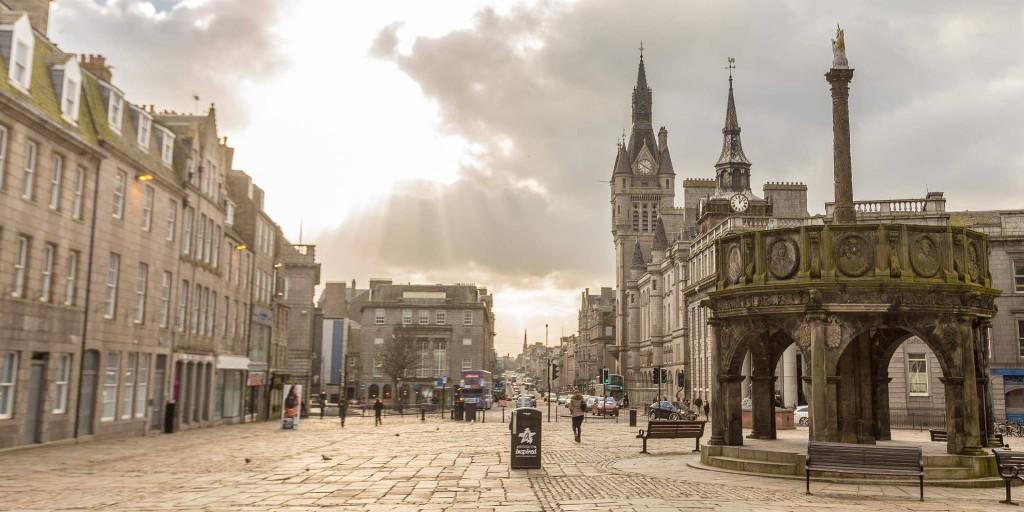 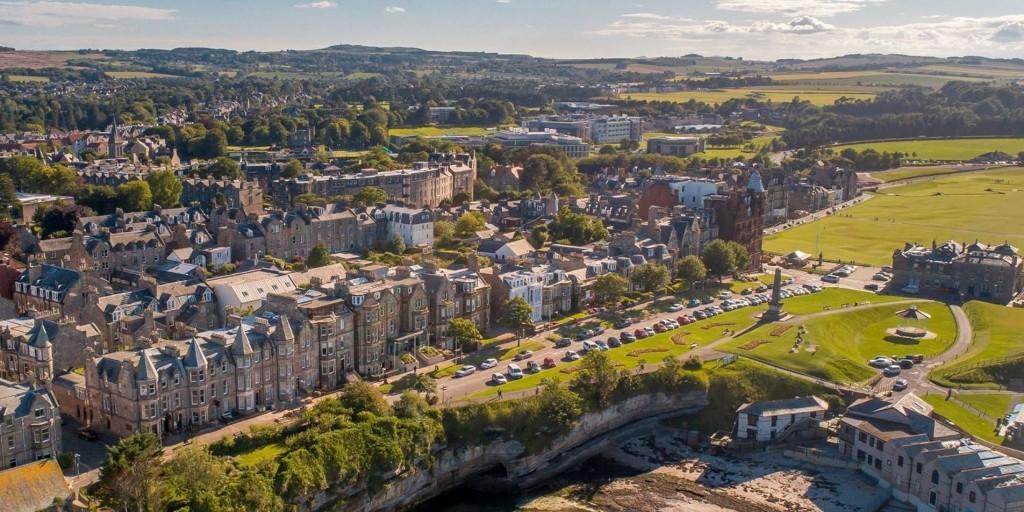